Dates with my husband are not a joke

Tonight I am going to tell you something that happened to me.  Let me take you back just a bit. I am going to take you back to February 2015. Steve was discharged from the hospital and went to live with my mom to recover from his illness. I finished the first half of my third semester of school. Then the summer rolled around and Steve was mostly with my parents while I worked. I was able to see him a little bit. I was working as much as I could to make up for the time that I missed while he was sick.

Then the fall semester started, for 8 weeks I busted by butt finishing the second half of my third semester. The second 8 weeks of the term I took two other classes preparing for my BSN degree. I did not have much time with Steve. We have maintained a long distance relationship/marriage knowing that I had one more term left this coming spring and then I would be done with school. Then after I took the nursing boards he would be able to come home full time.

Then BAM I was in the car accident. I have been living with 24-hour pain, broken bones, ruptured ligaments, and PTSD. I have not had more than 10 minutes alone by myself, let alone time with Steve. Neither of us is able to drive. In order for us to even have a date night that is not “in-house,” we have to have my parents drive us. Let’s also add the fact that neither of us has an income at this time. We are surviving off of donations or money from my mom.  (Just so you know….it feels terrible t to be our age and have to ask for a ride, and money to have a date with my husband or for him to have a date with his wife.

Tonight Steve and I were able to arrange to have a real date. We were driven to a Mexican restaurant. We had a dinner just the two of us… I took a very cute picture of steve while sitting at the restaurant. I even posted a little note on FB about it with the picture. 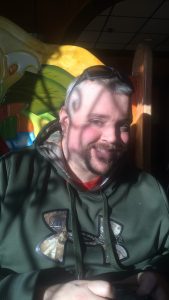 steve sitting at dinner with the sun shining on his face

We then were blessed enough to be able to be picked up and driven to the movies. Now, it’s in the same parking lot, just about 1-2 city blocks away. Just was easier to be driven. We saw a movie that Steve wanted to see about Hank Williams. It is called ‘I saw the light’.  We took this picture while in the movie theater. 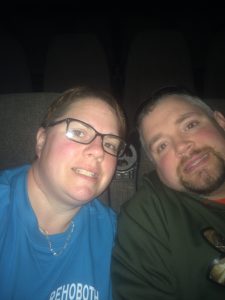 Steve and I sitting in the movie theater.

Now, we had an amazing time. We got to spend time together. We laughed and talked. The biggest point is that did something special tonight that we have not been able to do for more than one year. Over the past year, BOTH Steve and I almost lost our life. I do not joke about that, and I do not make light of it.

In 4 months, it will be August and I will be getting ready to start school again. I will be living back in our home alone. I will be working full-time night-shift while attending full-time nursing school during the day. I will not see or spend time with my Steve for 16 weeks.

Just know that I cherish every minute I get to spend with Steve.